When it comes to Anthony Gottlieb’s “Dream of Enlightenment“, my anticipation would be an understatement.

When in 2004 I read and loved his earlier “Dream of Reason” (Greeks to Renaissance) and noted a second volume was in the pipeline, I was on pre-order lists with the publisher, and retail outlets, I even followed-up with enquiries about forecast publishing dates over many years, all to no avail until eventually it dropped off my radar. When, just last year in 2015, reading and reviewing Kenan Malik’s “Moral Compass“ I saw this as maybe plugging the gap in bringing the story up to date, at least as far as moral philosophy is concerned; Malik in fact cites Dream of Reason as a significant source – from Russell via Gottlieb to Malik I opined.

As with Reason, Enlightenment is not only thoroughly researched and referenced, and selectively comprehensive regarding the canon of Western philosophy, but written with engaging style and wit. Great fun as well as educational, and a longer-term reference resource to boot. Recommended if for no other reasons.

The review below is full of spoilers and favourite quotes, partly to illustrate the style, but also to gut and capture the jumping-off points for my own agenda.

Firstly, we already know there is a third volume on the way. The scope here takes us from the renaissance through the transition of the enlightenment to modern philosophy, from Descartes to Hume. The journey through modern philosophy is for the later volume, hopefully beyond post-modernism to PoPoMo in my case – or will there be a fourth?

Chapters focus on the key thinkers, with other important contributors woven in. Fascinating are the overlaps in meetings and correspondence between all of these. Descartes, Hobbes, Locke, Leibnitz and Hume are the headliners but as well as the dependencies between these, the interactions with Bacon, Galileo, Newton, Boyle, Bayle, Voltaire, D’Alembert, Montaigne and Rosseau are manifest. The whole story takes place in the 150 years between the 1620’s and the 1770’s.

I’ve read around two thirds of it as I write this, having read the whole apart from Leibnitz and Hume, and having skipped ahead to read the Pythonesque concluding chapter “What has the Enlightenment Ever Done for Us?” I’ve paused to write where I have because Leibnitz feels like he’s going to be all new and important for me, and Hume is the focus of my current reading generally, so I wanted to brain-dump all the notes I’ve garnered to date, and proceed unhindered. [Post Note: Leibnitz update here.]

The 10th November 1619 was pivotal when Descartes suffered a nervous breakdown or intellectual enlightenment, (a common modern confusion IMHO), as he stumbled upon his:

“foundations for a marvellous science”

… apparently whilst dreaming of his encounter exactly a year earlier when Isacc Beeckman translated a puzzling Flemish billboard into Latin for him. On hearing in 1633 of Galileo’s troubles,

Descartes was keen to avoid rows with the church. At this point his scientific researches pretty much came to an end. One lesson of Galileo’s trial was that religion and science could not ignore one another.

Descartes is famous in popular imagination for his “cogito ergo sum” generally translated as I think therefore I am. But the idea that whatever one thinks rightly or wrongly about what exists in the world, the fact that I am thinking it means it’s a given that I exist, is as old as philosophy itself. St. Augustine wrote variations on

“If I am deceived, I exist”

on at least 6 occasions, harking back to Sextus Empricus two centuries before, if not Epicurus and Plato long before that.

There is much misunderstanding of both Descartes and his critics over his dualist model de res extensa and de res cogitans and the extent to which space and matter are one and the same extensa. Either way it is debatabe that Descartes believed in a hard – zero extensa-cogitans interaction – kind of dualism, but Gottlieb notes wryly:

Fortunately for the survival and development of mankind, the desire to make use of inanimate materials has not been confined to those who have been convinced by the dualist strain in Descartes’s writings.

In his warning to metaphysicians like Malbranche, in his 1648 words to his student Frans Berman, Gottlieb notes:

He [Descartes] was delivering the same message as some of today’s anti-philosophical scientists, who scoff that philosophers should  focus on up-to-date physics or biology and [get a real job].

Rather than dividing philosophical (and scientific) schools into competing teams, Gottlieb suggests:

Bacon maintained that there are really three kinds of philosophers: ants, spiders and bees.

Empiricists [of external experience] are like ants. They simply accumulate and use;

Rationalists [of internal thought], like spiders, spin webs for themselves.

Bacon advocated the way of the bee: one should [synthesise the best parts of the empirical and the rational]. Descartes, Hobbes, Locke, Spinoza, Leibnitz and Hume all aspired to be bees, though none of them quite put it that way.

Hobbes is one of those philosophers I know mainly by repute rather than any actual reading, so Gottlieb’s chapter was enlightening. In translating Thucydides in 1629 Hobbes found a timely political view he shared:

[Preferring] government when it was democratical in name, but in effect monarchical.

[Not liking] democracy, because it left people prey to demagogues who led them [by popular appeal to their emotions] into a mess of inconsistent resolutions.

[Noting that] anyone in Athens who gave the people good advice was rewarded with unpopularity.

For me this is very much the memetic problem that puts governance at the core of my agenda. What is popular is easy to communicate and share, essentially self-fulfilling, whereas what is good is likely to be more subtly nuanced than an appeal to the obvious. Corbynism springs to mind, but over the pond: 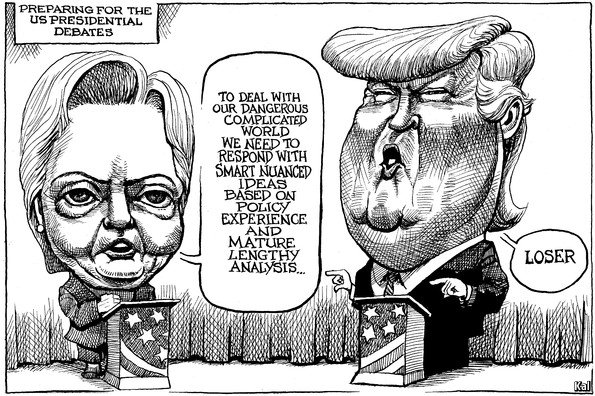 In Hobbes mechanical view – what I might think of as a systems view – he like Rousseau is applying drivers to the component parts of the “commonwealth” (system) and prescribing the best forms of government. They had opposing views about the relative positions of brutish vs enlightened motivations, but in reducing either of them to a single paramount view of one element driving the whole of human nature we do them and ourselves a disservice.

Closer to home, I see this as very much what has become known (after Maslow) as the hierarchy of needs. The framework and its components are important and valuable, but the generalisation needs to recognise individual contexts when applied wisely. Wisdom is more than the mechanical application of arithmetic. Yes, Mr Pinker, “nowadays we can do better.”

Plenty more good stuff on the subtleties of Hobbes (and Rousseau) to come back to in Gottlieb’s Dream of Enlightenment.

Spinoza is the subject of the next chapter. He shared Hobbes’ admiration for geometry, though this did him considerable less harm than it did Hobbes. Both men were condemned by their contemporaries, and by several subsequent generations. But although Spinoza was once at least as vilified as Hobbes, he came eventually to be regarded [as the] most lovable of philosophers.

Hobbes has not won such affection.

Spinoza the lovable, pantheist, renegade-Jew is, unlike Hobbes, someone I’ve both studied and loved, so for me little entirely new in the next chapter. Given my main route to Spinoza has been via Rebecca Goldstein, and given my ongoing interests in linking Spinoza with Gödel, Einstein and Wittgenstein, Gottlieb makes this interesting remark:

Perhaps the most famous self-proclaimed disciple of Spinoza in the twentieth century was Einstein, who, when asked by a Rabbi whether or not he believed in God, replied, “I believe in Spinoza’s God, who reveals himself in the harmony of all being, not in a God who concerns himself with the fate and actions of men.”

Eisntein was probably just being diplomatic. Spinoza’s God is, after all, a convenient deity for those who might more accurately be described as non-religious. The “religion” of Spinozism is in fact rather close to modern secularism.

(Heine, 1835) “There is in Spinoza’s writings a certain inexplicable atmosphere, as though one could feel a breeze of the future.”

Locke, important as he is for we British, though less so than Hume in my view, has had his work summed up in the words of C S Peirce as “Men must think for themselves.” Clearly part of the tradition of British empiricism, Ryle & Russell concluded he may even have invented “common sense”:

[Lock] most typifies the down-to-earth and commonsensical virtues that are now seen as essentially British. He was even interested in Gardening.

He wrote, self-effacing his own contribution, what has been taken to be a statement of the proper aims of philosophy. Standing on the shoulders of giants, with an intriguing use of Capitalisation he suggested:

The Commonwealth of Learning is not at this time without Master Builders, whose Mighty Designs, in advancing the Sciences, will leave lasting monuments to the Admiration of Posterity; But every one must not hope to be a [Boyle … Huygens … or the incomparable] Mr. Newton, with some other of that Strain;

’tis ambition enough to be employed as an under-labourer in clearing the Ground a little, and removing some of the Rubbish that lies in the way of Knowledge.

Leibnitz and Hume to come, in a later post. As I’ve said already, Gottlieb’s Dream of Enlightenment is a very much recommended follow-up to his Dream of Reason in both readable style and educational content.