Quite a few of my recent posts have been focussed on the idealism <> realism relationship – from the original reality and appearances saga, where we discover truth vs seeming goes back as far as pre-Socratic Parmenides – to Hegel/Bradley vs Russell/Moore in the late 19th C / early 20th C. One reason for it being topical is that I was goaded into posting a megalomaniac whole world in an information metaphysics, and I had to organise my thinking on what I meant by my kind of information realism.

The second was that Bernardo Kastrup’s “The Idea of the World” had been making a buzz and social media traffic seemed split on whether he was really talking about an information realism or a literal pan-psychic idealism. 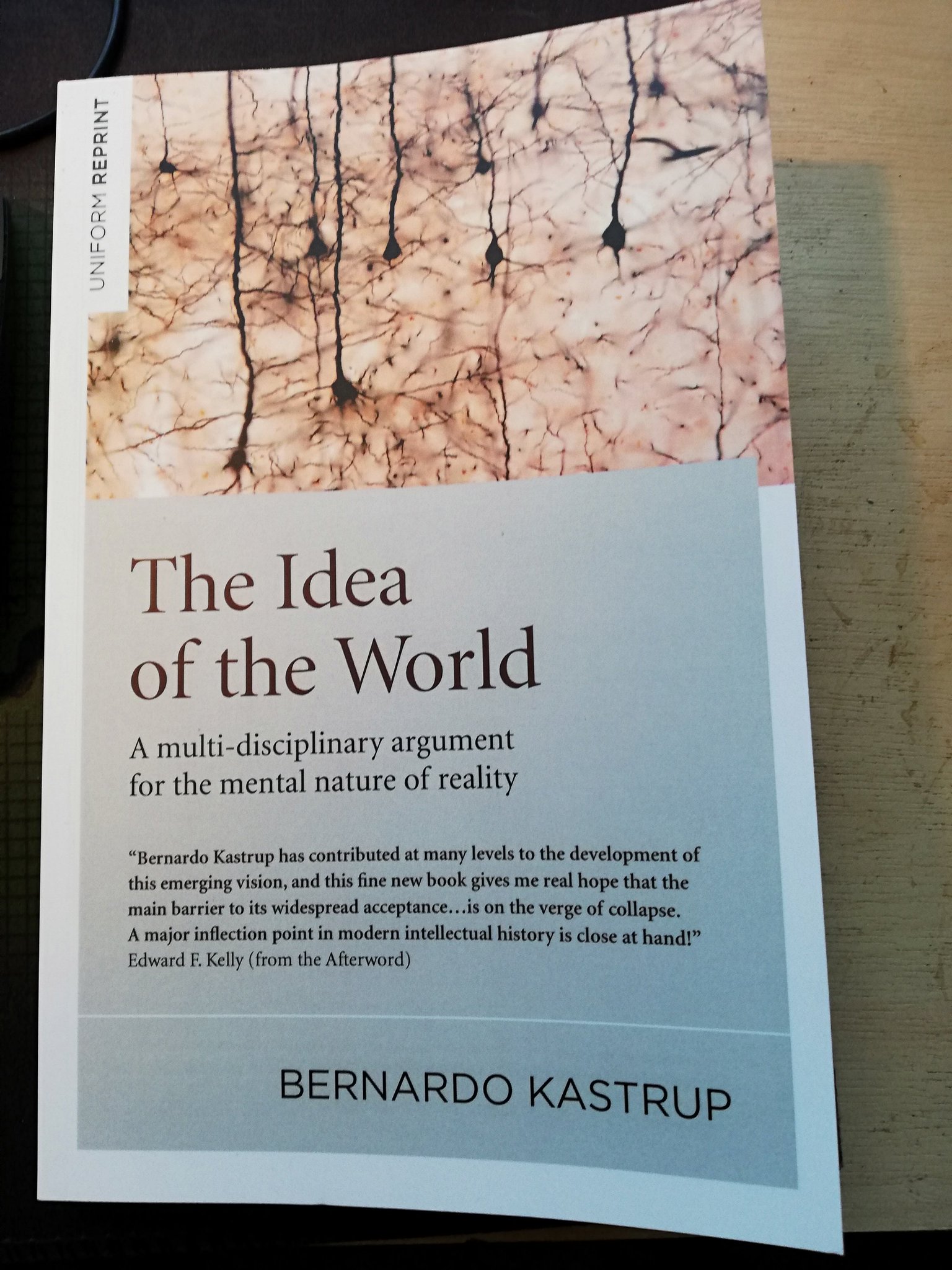 Bernardo seems insistent he really does mean the latter.

I happen to agree with most of the publicity blurbs – that “intellectual history – is approaching – a major inflection point” where a scientistic flavour of physical/material realism is knocked off its perch. I’ve been doing my bit to  point this out and help make it happen for two decades. And I’ve not been shy in claiming that the whole future of human rationality is at stake here, at a critical time when our collective decision-making is exposed as failing at the speed of electronic media.

… the whole future of human rationality is at stake here, at a critical time when our collective decision-making is exposed as failing … (Me)

And I’m hoping that the claim that we have a “rigorous case for the primacy of mind in nature” holds up in terms of rigour, because I am sceptical that the inflection requires us to flip-flop entirely from material realism to idealism. I naturally prefer relational balance to binary choice arguments, but I also happen to believe that the relational model tells a better story of life, the universe and everything. Sure, a large part of reality seems mental, because it is. But that doesn’t mean we need to throw the rest of reality out with the bathwater.

So, in starting with Bernardo’s book, I’m both hopeful and sceptical.

[If you are reading this version, it’s a work in progress as I read and add to my thoughts. Eventually – if there is demand – I will produce a consolidated review or a coherent essay or two.]

There are several introductory sections, and each main Part has its own new preamble / summary to the existing papers collected there. All point to Part II, especially Ch5, as the core thesis.

His arguments against material realism are well established and non-contentious to me (it’s why I’m here these 20 years).

He commits the sin of dismissing Dennett on the strength of his 1991 “Consciousness (not) Explained” thus ignoring 30 years of work – but I’ll forgive that if we end up at a credible thesis. He also doesn’t so far spend any time on the processes of evolution of higher structures and organisms from his metaphysics, but he is clear that he is building an ontology from it. The “hard problem” of received wisdom is indeed a problem with the current ways of thinking. In that Dennett would heartily agree.

Kastrup’s abiding focus is the epistemic deficit of alternative metaphysics and Occam’s drive for parsimony in insisting on his pan-psychic monism or literal idealism and on minimising any unnecessary levels of abstraction.

Everything is made of mind-stuff (full stop).

His rejection of computationalism and so-called bottom-up pan-psychisms is based on these epistemic and parsimonious considerations, and the combinatorial problem of how (at least partially) proto-psychic primitives assemble into higher mental structures we’d recognise. So far for me however, whilst his ontology is indeed parsimonious it has its own epistemic gap in the processes of how the world we know evolves from his metaphysical ontology. Similarly the parsimony is a rule of thumb, a rule for guidance of the wise, like all rules, and never in itself a clinching argument.

That said, Kastrup says a great deal I agree with and he says it well. Even in his own terms I’m 95% with him. (In fact I have many excellent passages highlighted for posting in a more thorough review later.) HOWEVER, positing his specific “TWE” idea for the monist continuum is only a way of speaking away from what I already consider to be true and valid as a metaphysics. And that’s true even if I would call it an informational monism or an information realism, and Kastrup explicitly rejects such a notion. For the sake of one word, I’m 99% with him. Let’s cut straight to the chase and map his core metaphysics to my existing view.

All things experience relationships with other things. Uncontroversial.

Some unitary-associated-arrangements of such primitive experiences become individuals self-aware of their experiencing. He calls these “alters” (in the psychological sense) which is excellent for the self-other awareness connotation (in Germanic languages), and for the certainty (after Descartes) that experiencing is the one thing we alters can be sure of. This is the key level shift from mind-stuff in general to “a mind”. (He relies a great deal on Nagel’s something it’s like to be in deriving this entity aware of their experiencing, but I’ve never found Nagel’s expression of this any more convincing than this already convincing experiential expression.) The key historical problem here is Descartes’ Latin was translated to “think” – and as we shall see the distinction between experience and thought matters a great deal (or does it?)

This experience of things is true at all levels from fundamental metaphysics upwards. (Though Kastrup shuns bottom-up thinking, and I just use it in an evolutionary history sense. In the beginning, everywhere and forever … etc.) The fundamental stuff is That Which Experiences – “TWE”. That is the experience, the experienc-er and the experienc-ed.

[This is pretty much Northrop (the aesthetic continuum), James (the radical empirical nature of experience) and Pirsig (the dynamic quality of such experience) in other words. Post Note: And I would now include Whitehead’s “Nexus” here. This was a couple of months before I took the hint and read “Process & Reality”.]

What is particularly interesting to me is his talk of arrangements as dynamic patterns in the TWE (he uses a water & ripples analogy several times). He also is at pains to point out that the dynamic arrangements are distinct from the medium. What is strange is using the word “thought” for these sub-alter patterns as well as the patterns within an alter. It seems a much more natural way of talking to refer to these sub-alter TWE patterns as information patterns; their dynamics as information processing; their perception and experiencing as communication and the TWE background as supporting all possibilities of these experiential relationship arrangements.

More natural, and fitting well with information and entropy theories on processes of evolution, and with information theories that recognise disembodied as well as embodied information. It isn’t that conceptions of information are vague or ill-defined, just that there are different things being talked about – as with the ripples and the water.

It seems almost a wilful insistence on a parsimonious monism called idealism that insists the same word “thought” is used for both cases. Apart from the way of talking (use of that word) I can’t yet see any real distinction between this TWE / Alter model and an information-based monism with that experiential triple relationship.

Adding. Tested Bernardo on his use of “thought” in a twitter exchange. Turns out it’s really a definitional question. I could define “information” using the same definition.

I would tend to use “mental” when there was actually “a mind” involved (in an alter) – but OK with “non-perceptual (potential) experiential states” …. to use his words …., anyway.

This is another point where I’d invoke Dennett. My problem / alternative word issue is neither precious about the word nor the definition, just about the naturalness in the context of the dialogue. Whichever word we use, and however rigorously we define it at the outset, the real definition is the one that arises when the dialogue emerges from any confusing baggage. (Basically I’m sceptical that we will lose the baggage that a thought has a thinker. It’s the past participle of a verb). Thought-stuff / TWE / Experiential potential – whatever ontological element, can precede thinking per se. (This is related to the lack of any process model so far …)

You can’t “define” your way out of a problem.

Also (more Dennett) the intentional stance is useful in accepting the use of “experience” – the iron-filings “experience” the presence of a magnet, without needing to suggest they (literally) perceive or hold any thought to that effect, however we used the words. [I’m with Wittgenstein (and Dennett) that words and meanings evolve in the communication game we call dialogue.]

After positing the TWE “Mind at Large” model in Ch5, Ch6 focusses on recent scientific support and justification for such a model.

Starting from the ubiquitous quantum weirdness, that experience of observation depends on the observer and the act of observation, Kastrup goes through a few famous interpretations that reinforce the context-dependence of apparently (even) scientific fact. As I’ve said, none of this is remotely controversial (to me).

On the positive side, he makes good use of Bohm, Rovelli and indeed Barfield for example in taking true account of “the appearances” of would-be observations of the real world beyond our alter (mind). All highly recommended here already – indeed two of them already referenced by me in earlier comments above.

… triad-model shows, we can never know the real world in any literal sense, but that’s different from saying it doesn’t exist, throwing baby out with the bathwater.

An idea too far.

I agree strongly on two things from Kastrup:

(a) The material-realist model needs knocking of its perch – it makes no sense to presume absolute primacy of the physical model, beyond our conceptions of that model.

(b) There is ample evidence that dynamic patterns of information (aka “thought”) in Kastrup’s “TWE” conception pervade the whole world, the presumed objective one and the known subjective one.

There is a strong case for the primacy of this information, communication & computation underlying the whole world. It’s step too far to posit a way of talking about information processing as “mind and thought”. Those words are reserved of inter-alter-minds, but not a mind at large. An idea too far to call it idealism.

I can see the main argument against the information primacy model remains the so-called hard question – how algorithmic information processing suddenly becomes the subjective mind experience of our alters? The answer to that – in a word – is evolution. Evolution of mind and evolution of thought-in-dialogue about the mind. We’re getting there. The remaining difference may simply be a way of talking, a way of drawing a picture. As I noted earlier Dennett’s intentional stance is a (good) way of thinking and talking about things involved in evolutionary processes, but ultimately we have to be honest about the world model we hold – make an ontological commitment (after Goldstein) in our explanatory choice of what really exists.

It’s a great read. Well written thoughts about all the right source ideas. If these ideas are new to you, read Kastrup’s “Idea of the World”. It may pump book sales to seriously posit the mind-at-large idealism hypothesis – it certainly makes for a great dialogue.

One thought on “Taking Idealism for a Spin”