Start the Week – Rationality in an Irrational Age – BBC Sounds

Another fantastic edition. Well done @amolrajan – it really is possible to have intelligent dialogue on “tricky” subjects.@amiasrinivasan and @sapinker on sex between student and professor anyone? https://t.co/pzjjdUeCnE

So as defined by Pinker in his own words,

“Rationality is using knowledge to attain [human] goals.”
(Qualified by the fact that it cannot tell us what those goals should be, the focus being on knowledge & methods, and on concepts “such as logic, critical-thinking and causation”.)

And it’s his response to the question of why humanity is (appears to be) losing its mind, contrasting the peaks of rational attainment with the prevailing level of seemingly irrational public discourse. Amen to that.

Explicitly my own agenda for over two decades (and implicitly on the case since 1970’s Bronowski), BUT with such a broad definition from Pinker we will need also to recognise also that:

So in fact such a broad definition of rationality tells us nothing and what we really have is a shift back to focussing on definitions:

[Aside: Information vs Knowledge? There have been many attempts at making distinctions between Data > Information > Knowledge > Wisdom (*). None are wrong, they just address different intended applications. At the human scale, I tend to use Information as indicating forms available to individual human interpretation and Knowledge as indicating forms available to shared human use. Data and Information have levels and associated definitions as fundamental as physics itself. One particular Information > Knowledge distinction I like is that of Chiara Marletto which suggests we think of Information as copiable and Knowledge as a form that is self-preserving through processes of use, even at physical & bio-chemical levels below cognitive intelligence.]

In situations where the knowledge is non-contentious representation of objective information and where causal paths are predictably non-contentious we have what I think of as Rationality-101 – the easy bit.

So sure, when dealing with “pre-Rational” humans who don’t see the need or don’t have the skills to check the objective truth value of information made available to them or understand basic logic and modern science of cause and effect, Rationality-101 has significant value. Value in educating the young or naÃ¯ve and in compensating for their ignorance of implicit political motivations and biases, including their own, or the unreliability of anecdotal knowledge or received knowledge from authority of power structures. Thanks to Lee Beaumont for giving me the pre-Rational contrast with my own post-Rational agenda.

However, Rationality-101 as caricatured above is only part of any solution to human progress. More scarily, if we persist in using it where we’re dealing with post-Rational issues – modernism or scientism – it is actually counter-productive. This is of course the point that Post-Modernists from Wittgenstein onward have been trying to make. Anyone suggesting PoMo’s were somehow intent on destroying science are missing their warning that post-Galilean science has its limits. I tend to brand myself PoPoMo to recognise that there is a growing caucus of rational scientists and philosophers that do get it, and are working to fix the fundaments of science itself, even space-time and causation, not to mention those human goals.

Meantime we simply need to accept
that “scientific” rationality
isn’t the answer to everything.

(If I’ve significantly missed what Pinker says rationality is – objective, positivist, scientific – I’d like to hear from you.)

To conclude, many people since GÃ¶del have seen the bootstrapping problem of how to change the foundations of the edifice we’re operating in – the whole cannot include its own definition. Obviously we’d like to use rationality whilst trying to fix or replace it, but this is quite different to the evolution of the contingent content within the body of rational knowledge. This isn’t just Trigger’s Broom (or the Ship of Theseus). This is meta on several levels. I used to call it Catch-22. Pinker himself has been using the (jokey) riposte that people who argue against his thesis using rational argument are actually confirming his thesis. And many people – enlightened positivists – have equally gently posted memes mocking this. 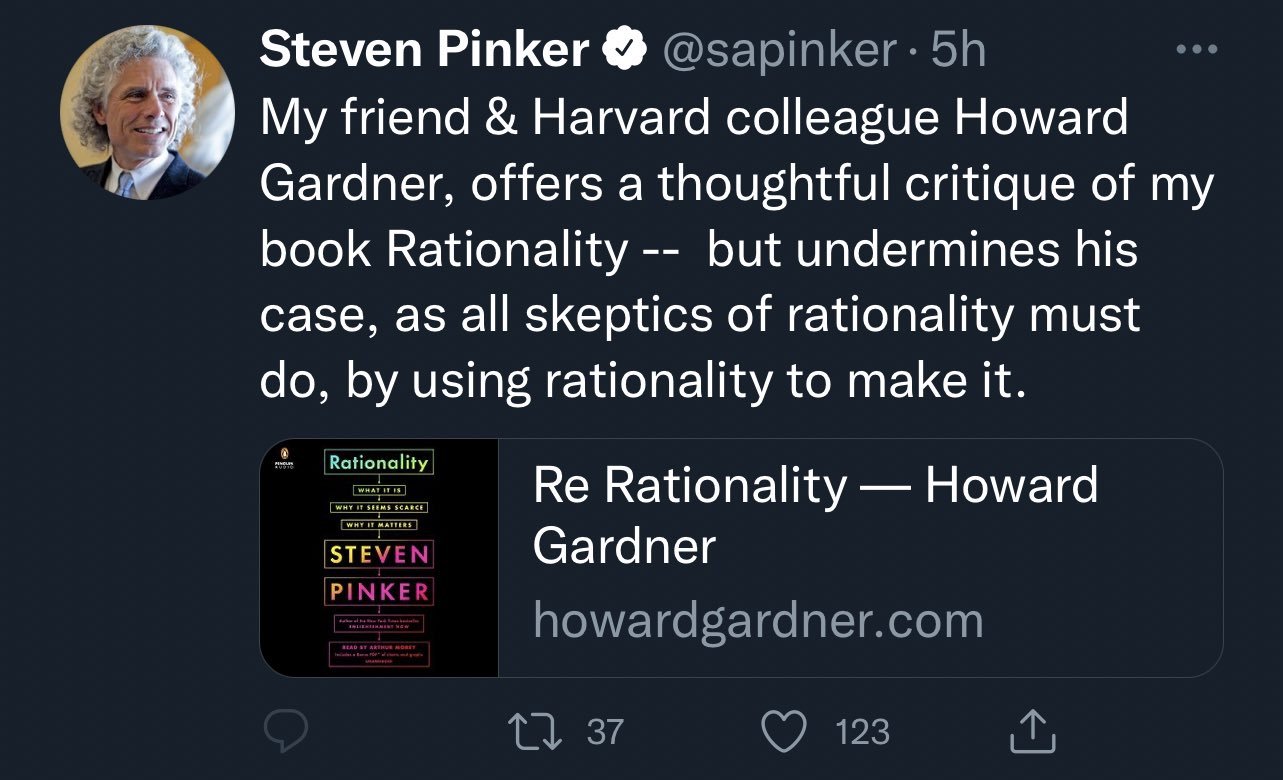 Whenever I see arguments like this (Pinker’s) I think of Wittgenstein turning his chair around to face away from the Vienna Circle, and proceeding to recite the poetry of Rabindranath Tagore… https://t.co/U5FdlxscoE

I counter with Dennett pointing out the problem that:

“if you agree to argue
only on your opponentâ€™s basis,
then youâ€™ve already lost“.

[Post Note – (*) Wisdom is the property we’re really seeking, since we can never fully codify rules of Information & Knowledge, rules being for guidance of the wise, etc. Interestingly, Matthew d’Ancona who wrote that excellent piece on the deep rational issues in the “TERF War” for Tortoise, also wrote a shorter follow-up piece focussing on Wisdom in The Standard.]

Great (short) piece on #Wisdom – something we undervalue since it eludes definition – but which we really need to recognise and promote in everyday politics.

Guess @MatthewdAncona also had these thoughts in mind when he wrote his “crossroads” @tortoise piece earlier this week. https://t.co/fQifHHF1HI

One thought on “Rationality According to Pinker”