Two or three threads came together this morning.

Ongoing debates about European responses to “immigrants”, “anti-semitism” and “islamism” – politically correct to the point of perversion of sense. Insanity. And of course later (lower down) #Chilcot. Where to start?

Here a piece by Chris Corrigan posted on Facebook by Johnnie Moore, on managerialism and the conflict between “efficiency” and common humanity, at the inevitable expense of care and attention to the latter.

“Management practices these days manage for efficiency which on the surface is widely accepted as a good thing. But there are things in human experience for which efficiency is devastating. Love, care, community, and attention are all made much worse by being efficient.”

“Absolutely! It’s a shared mental illness to objectify anything we need to manage (to justify, govern, make efficient, etc) and remove any aspect of compassionate caring humanity from our equations. (A contagious fashion, a meme. Scientism I’ve been calling it for 15 years.)”

Here two tweets by Anne Marie Waters on what should be sympathetic compassion for those punished for crimes against individuals who end up feeling guilty and behaving irrationally as the victims.

Self-hatred and irresponsibility in equal measure. This is not sanity. Something is terribly wrong. https://t.co/LDOF9uZWfq

@thinkingzionist @AMDWaters the mental illness you call “leftism” is this problem – objectifying everything, even “objects” of compassion.

Anne Marie calls it “Leftism” – her perspective rejectingÂ dysfunctional socialist politics, seen as ignoring these issues for reasons of political correctness, freeing herself to address the issues head-on.

What Chris calls “Managerialism”, I’ve been calling “Scientism” throughout this blogging project. But what’s in a name? Underlying the whole is the meme that expects “objectification” of anything we’re dealing with, so we can manage it, justify it, quantify it, put them in our logical and arithmetic equations.

This ignores common humanity, compassion, care and love. By design they’reÂ excluded from any objective analysis. It’s a collective mental illness to think this way. It’s not complicated, but it must be resisted.

Also related this exchange from Nassim Nicholas Taleb denying the value of Game Theory in his statistical equations. He’s right, they won’t fit his rigorous logic (I have a separate draft post on this) but they therefore exclude the psychology between subjects, empathetic or competitive. A kind of mental illness, autism to exclude personal subjective impression, to reduce psychologyÂ to objective guesswork (ie sophisticated statistical analyses).

Need to join-up those three threads, they may even seem counter-intuitively related to my point, but they’re part of the same underlying meme.

Continuing, today is of course publication of #Chilcot, and exactly the same problem, in BBC summary he concludes:

“[F]uture military action on such a scale [should] only be possible with more careful analysis and political judgement.”

Wong again. Analysis may be more rigorous, but never careful. It’s care-less by design. We murder to dissect. What is really meant is:

Judgment by analysis is mere “fudgement” – a scientistic managerial way of justifying action, but very unwise judgement. Specific issues in the #Iraq / #Chilcot case are about “planning” the follow-through of taking action, not about the tough decision to take action. It’s the decision and (military) action that needs care, not the analysis. What we need is practical wisdom. Analysis is a mere tool. The fudge of the WMD Dossier was always a fudge because it could only ever be a fudge for what was already (properly) a judgement. 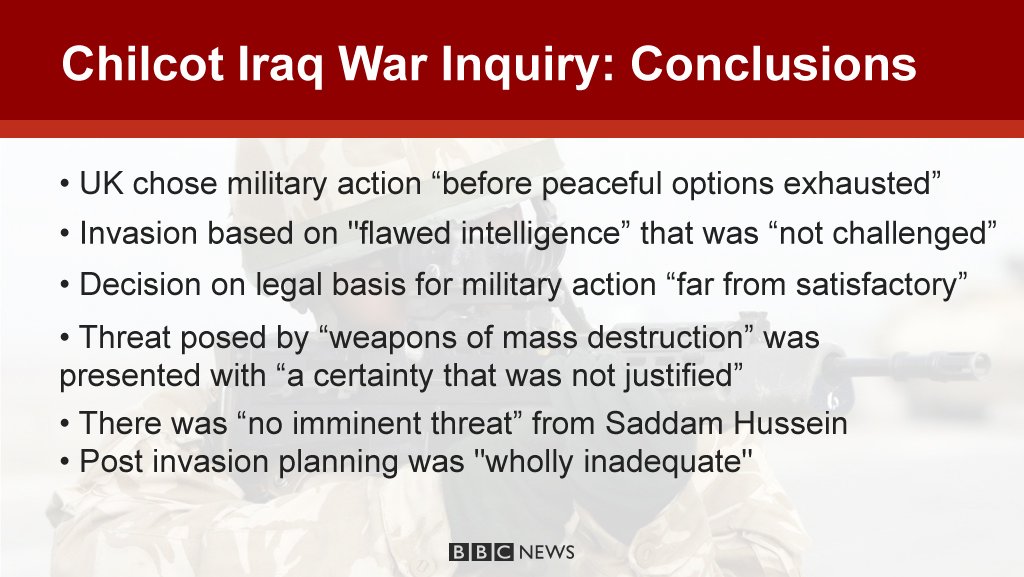 Excellent, but did Chilcot not find anything we didn’t all already “know”? @BBCBreaking #Chilcot

Exactly – liberal intervention was a good & wise call then, and it still is. It’s wisdom however, was destroyed by having to satisfy (ie fudge) objective justification, thereby taking eyes of the real ball of planning for the complex and long-term consequences of “regime change” – because this complex judgement of reality and planning options had to remain hidden so that a simplistic facade could be presented. Lots of good people (politicians and journos) had their careers destroyed knowing there was a lot wrong, but having no means to get the underlying issue addressed credibly for a world craving ethical simplicity.

For the mistakes of Iraq, there is still something in the doctrine of humanitarian intervention which I hope we do not lose.

One thought on “Managerialism, Leftism, Scientism, You Name It.”