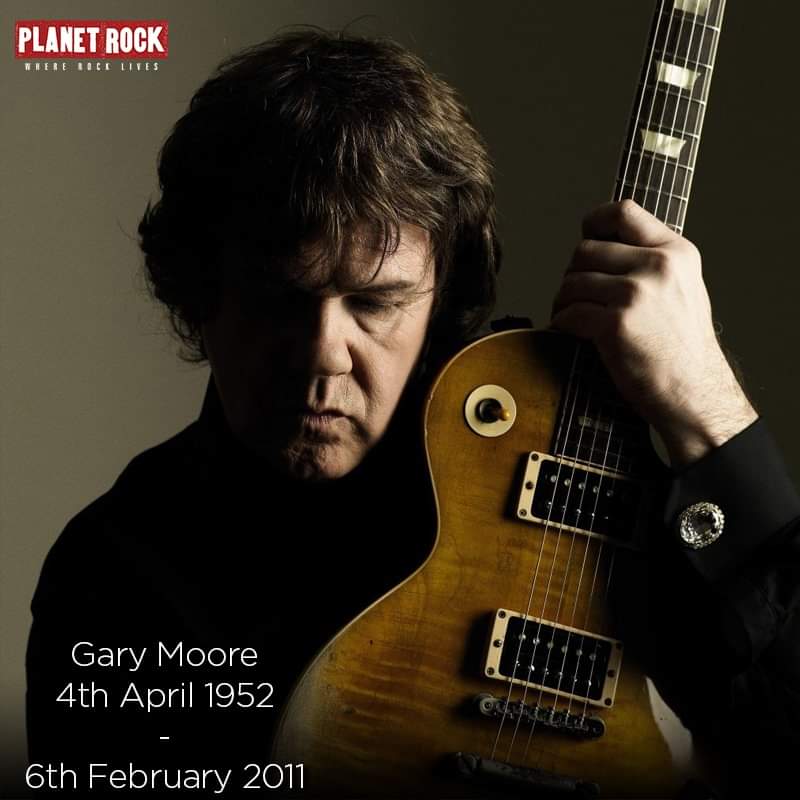 Gary Moore would have been 70 years old today.

Every time I see a reference to him, it brings back various memories starting with the (1971) Skid album with Skid Row, and probably a John Peel session or two? Don’t believe I ever saw him live with Skid Row (or Thin Lizzy). 72/74 I was a 6th former, 74/79 I was a student in, and working local to, London. Also had his (1973) Grinding Stone solo album, and 74 was the year he was helping out – regular music press speculation – but not really becoming part of Thin Lizzy. Most of 74/75/76/77 I was following pub-rock band Scarecrow several nights a week (!) with whom Gary jammed every couple of months, when he was in the bar watching them. Later, after 75, I saw him several times across London with Colosseum II and a whole fresh set of guitar-groupies. I had their (1976) Strange New Flesh album.

Most recent memory was being in Ryan’s Bar in Cobh, Dublin port at New Year 2016/17, 5 years after his death. There were two enormous monochrome photo prints behind the bar, one of Gary and one of Rory Gallagher (and no others) so their significance was an obvious conversation starter. Apart from the reminiscences above, I heard about his early times living in Cobh and frequenting that bar.

The memory that always comes up is the night he got the dreadful scar on his face. (Searching the blog it seems this is the first time I’ve documented this memory.) I was always pretty certain it happened in the spring of 75 in the upstairs bar of the Western Counties pub in Paddington where Scarecrow had a weekly residency. I didn’t witness the attack itself. I was downstairs watching the band, but the upstairs bar was an open horseshoe balcony with a wide staircase that swept down right in front of the stage. We certainly heard the commotion and I vividly recall his girlfriend and the blood as people scattered down the stairs. Now it’s possible I’ve conflated two memories – a bloody fight in the Counties and seeing Gary close-up before and after his recent scar. However the details are so consistent with the recollection of Eric Bell – the only documented reference all others seem to depend on – that it happened in Dingwalls, which was certainly a “cooler” hangout than the Counties. Guess I’ll never know now, although Scarecrow guitarist and luthier to the stars, Bill Puplett, could surely disconfirm or otherwise?

[Post Note: I see why I’m not finding some old references in the blog search. Some of my old pages on musical memories and photographs were on a domain I retired and only temporarily re-implemented. I’d need to rebuild content. In the old days, whilst blog posts were withing the blogging tool DB (WordPress now for many years) pages were most hand-crafted HTML. I’d need to reconstruct that content. The 22 years of blogging remains intact.]