A pet hate of mine is “rational” people who see the point of a rational argument as being to change someone’s mind, to convince someone of something.

A bonkers idea at any time, not to mention a complete waste of time if you think the person you are trying to convince isn’t being rational anyway. It’s a bonkers idea in general because only you can change your mind, and that’s true of anyone else. You can’t change my mind.

The point of dialogue is to learn. And to be “rational”, the dialogue can be any mix of the objectively logical and subjectively rhetorical as long as it is directed in good faith. The point is to understand better what you understand and believe. And that’s true of anyone else. When it’s not, you and/or they are not actually engaging in the dialogue, you’re not even at first-base yet. All bets are off.

Once that dialogue is engaged, minds evolve. That’s how minds change. They’re not changed by someone else.

There are only two situations where point-scoring critical debates that win and lose, making and refuting points, have any place.

Where both parties are already – in good faith – inside a control volume where it is the objective and mathematical logic that is being validated. Even in what look like academic scientific arguments, neither party will  remain confined to that control volume throughout. Everyone has an agenda and interests. Their skin may be in a different games.

Where the belief or opinion makes sense to be treated as a genuinely democratic choice. When the decision is properly going to be some kind of popular vote. Though again democracy is never perfect, and the debate will invariably be a mix of the objective and subjective.

Anywhere else it’s only dialogue that evolves minds. Even the Socratic questioning kind can only go so far in good faith if it expects to involve undermining the other party or reducing a case to absurdity. Any actual mind changing will depend on defensive responses at the time and reflective activity after the event. It is possible to protest too much. It might indicate loss of good faith and skin in different games.

It is the reflection – the internal experience – that might evolve your mind. 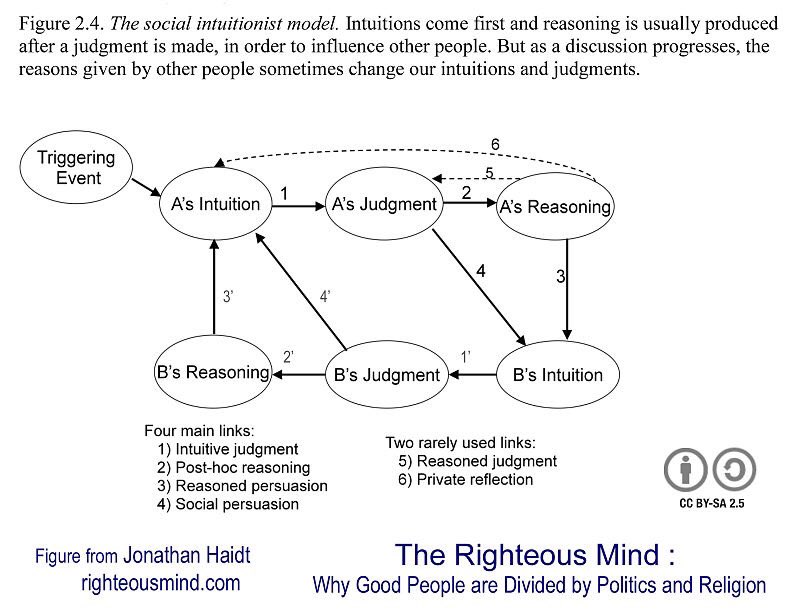 Illustrates the other point I often make, that the “reasoning” aspect of the mind-changing – or even simple decision-making – is almost invariably a post-rationalisation (“post-hoc reasoning” here), reducing the outcome to some logical objective relations and causes, which is rarely what has actually happened psychologically.

And as it says, whilst I say it is the private reflection that actually changes the mind, it is a rare event compared to all of the other explicit stages of dialogue.

And of course, having thoroughly read and enjoyed The Righteous Mind some years ago, I’ve clearly absorbed Haidt’s thinking into my own. Nothing is invented by one person in isolation. Knowledge and understanding co-evolve.]

[Post Note: Interesting seeming counter-example from James Willis on how we are all however susceptible to persuasion. In the context of this post, I point out that this is persuasion to act. Nothing in this story changed anything about what James “believed”.]

Interesting and  believable from a many who knows statistical probabilities.]