Having some debate with (apparently / claimed) “Libertarian” colleagues about the relationship to a “Liberal Democrat” position. Obviously quite different things, but what exactly? Are we talking the same language?

The Nolan Chart has been around since Hans Eysenck described it in 1954. David Nolan published his standard diamond representation in 1971, but he has partisan US Libertarian motives from the start, so his position is top, front and centre in his presentation. 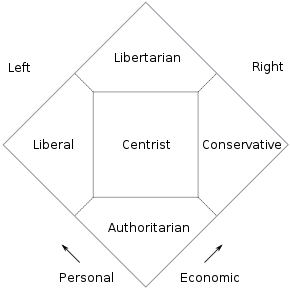 Despite Eysenck developing the idea in a UK context, almost all development since Nolan has a US focus. (The people I’m in debate with are neither UK nor US, just to complicate matters. Basically I’m not believing they’re as Libertarian as they claim – a matter of perspective of lived experience vs ideals.)

The so-called “Simplified Nolan Chart” at least has “Left” where the UK experience would expect it, what the US would call Liberal (though confusingly in this square version the left<>right axis is not horizontal):

Like all 2D diagrams of the human world – thank Boston Consulting Group for their “Grid” meme – there are many other dimensions and some developments have attempted 3D and more, with or without time. The best developed version I’ve found in web-searches is from “Atheist Republic” who clearly, as well as being pointedly atheist, are aligned with US republicanism, but so far as I can tell it only exists on their social-media pages and I can’t see who to credit for its creation. (The even weirder thing about this version – although the real-world positions map very well imho – is that it is flipped, with Libertarianism towards the bottom and Authoritarianism / Totalitarianism at the top. Doesn’t affect the ability to map, but may reflect political bias on whoever created it. It is in fact very close to the simplified version – apart from the flip – but with the “extreme” variants peppered around it.)

Whether good or bad, this version also maps Liberalism onto Centrism, which at least fits UK experience. The confusion with Left / Liberal is just one part of the modern shift that – unless you are one of the more extreme positions – Left<>Right is no longer really dominant and the question is more one of Freedom<>Authority.

Easy to see a Nolan-diamond un-flipped version of the above?

… a holding post to be developed into a longer conversation.

Thought … maybe the Cynefin idea (Complicated<>Complex) might free us from the BCG 2×2 Grid?

Oh wow, the new “Libertarians” that this dialogue was intended for are now promoting Ayn Rand as their hero. Looking more like extreme US Right Libertarianism by the day!: