Our hearts go out to those caught up in the Paris and Beirut atrocities of the past week. At the beginning of the year we were all “Je Suis Charlie” and now 70% of my Facebook contacts have adopted the tricolor avatar of “Vive Paris”. [See also Isabel Hardman.] Charlie Hebdo was specifically – no less unjustified – in the sphere of freedom of expression, whereas the recent Paris attacks were of the more general “indiscriminate” soft terror target. Still, disconcerting that human nature more quickly expressed solidarity with the closer to home event than equally atrocious, soft and indiscriminate Lebanese or Somali or Nigerian events in between, but the instinctive solidarity should be no less real.

And, take your pick – ISIS / Daesh / AlQaeda / Taliban / BokoHaram – whatever violent terrorism (against hard / soft / human and cultural targets) committed by or with allegiance to any variation of Islamist extremist with or without specific claims in the name of Islam – is unjustifiable murderous evil first and foremost whatever explanations or reasons may exist. And why stop there, – this has always and equally been true for IRA / ETA / BMG, any flavour of terrorism in fact. (For so-called “state-sponsored terrorism” – see *)

The first response is quite rightly honor & respect for, and human solidarity with, those affected directly, as well as using lethal force against perpetrators to prevent continuation and (however imperfectly) bring to justice and secure against recurrence. Part of that solidarity is to continue our lives there and elsewhere as normally as possible in defiance of the immediate terrorist aim or threat of insecurity. And still a further part is at the very least to respect the “security forces” efforts to achieve that. Even we non-theist / non-religious / non-believers should recognise this “human solidarity” as the spiritual core of “religion” – that which binds us (as humans). Something true quite independent of any specific religious “dogmas”, churches, texts or their interpretations.

This is surely a given. Clear and simple.

To raise any objections or even nuances at this point of immediacy – in our Spartacus moment – is often branded “apologist”. But to recognise there is more detail to be considered beyond this immediate response is not apologist at all. Terrorism is evil. But to stop there and to see it as pure evil – by “evil monsters” – without an agenda is denialism, a refusal to acknowledge and address any underlying issues.

What else these are depends on the agendas of the particular terrorists – actual and claimed. An extremist with no agenda is vanishingly rare. An extremist whose claimed objective is the whole of their motivation is similarly rare. So:

In the case of Jihadist / Islamist terrorists, much of their agenda may be claimed to be in the name of an Islamic religious objective, supported by their religious texts. Even for the claimants, an Islam-dominated state may be a common real aim, it may not be that objective in isolation, a means to an end. And, for the vast majority of adherents to Islam, the claim may be in the name of their religion, but not a claim they share or even recognise. A claim that majority reject as not in my name. Indeed most such religious adherents hold to the same basic human solidarity as the rest of us.

Now amongst religions, Islam does have particular problems as a source of such claims, and indeed deeper historical and cultural issues in terms how “Islamic” societies handle equality of opportunity, toleration of difference and freedoms of expression. And there is a whole agenda – a dozen agendas – there in how such issues should be addressed by society at large and by the wider Moslem community, working through normal processes of governance and change. But that agenda has little to do with the extremist terrorist agenda, except by association and as a potential source of difference and grievance.

In practice any claim of Islamic agendas by the Islamist extremists and terrorists, is always part of a wider political objective. At one extreme the assertion and imposition of an Islamic state per se, but always with a perhaps unspoken “anti-western” agenda – a state of affairs reacting to perceived oppressive, imperialist relationships in local and global economies. A more Islamic state in reaction to a more-western / less-Islamic state arrangement. Throw into that factional Islamic agendas between states with different positions in those relationships – Baathist, Salafist, Sunni, Shia, Saudi, Iraqi, Iranian, geo-political agendas then the power relationships of these with those western states and access to resources is complicated to say the least – on many cultural and ideological axes on any number of historical timescales. And of course the many states involved are at many different points on the axes of freedom and democracy. Suffice to say western positioning in those global geo-econo-political situations has its own imperfections, differences and hypocrisies between states. (* Given these even complexities it’s not difficult to see “legitimate” actions of states branded as state-sponsored terrorism, if only rhetorically.) Even without these specifics, resentments may simply be rejection of basic western democratic freedoms. Life’s complicated and these particular relationships have their own historical complications, so much so we even have a collective name for it – “The Middle East” situation.

The anti-western sentiments are real in those who perpetrate or embrace terrorism against the west or against interests in the complex situation that includes western relationships. And this is true whether the individual extremists have any first-hand reason to perceive any “imperialist oppression” or prejudices against themselves, or simply as more comfortable intellectual reasons to identify with such groups that do, or simply as more ignorant misguided “radicalisation”.

Disaffection and grievance arise in many forms. Resentment can run very deep.

As many commentators have already pronounced – we can never have total security as a solution to terrorist intent. A solid policy of enforcing such security so far as practically possible, in the face of the fact lethal force will always involve political (and human) risks and the fact that it can never totally succeed anyway is at least one incentive to remind would-be terrorists that we are not simply going to let them get away with it, martyr or not.

Be thankful the security guard on the gates of the Stade de France enforced the simple policy of frisking the suicide bomber that rocked-up there. We might otherwise be standing in solidarity with thousands rather than hundreds of innocent dead and maimed in Paris. [Hero security guards did their job – 3 suicide bombers, one victim.]

But one thing’s certain. Whilst addressing the immediate human solidarity and security enforcement aspects of Islamic terrorism, if we then fail to address, and be seen to address, underlying grievances real or imagined, then the motivations never go away and terrorism will continue and escalate.

Previously on Psybertron – Islam, We Have a Problem – one of 3 pieces written in the aftermath of Charlie Hebdo, where the specific topic at issue was freedom of expression, but many of the considerations of “imperfections” in the accepted western free-democratic position are clearly also relevant.

Also, previously on Psybertron – Anne Marie Waters talks sense on deeper oppressive and misogynistic aspects of Islam itself. (And my subsequent piece on the confusing bollocks created by conflation of Islam & Islamic culture with Islamism and Islamist policy, extreme or otherwise.)

See also Radical Islam and the Rage Against Modernity by Kenan Malik on Pandemonium. And his After Paris.

See also On Ideology and the Denial of Islamic Terror by Ben Cobley on A Free Left Blog.

See also Nine Conclusions Not To Draw From Paris by Douglas Murray in The Spectator.

The inevitable end-game for the Islamist Scumbags from Andrew Neil on This Week. And the same ironic “IS you’re fucked” conclusion from John Oliver the other side of the pond.

See also Isabel Hardman on cheap expressions of solidarity with and love for those afflicted also linked early in the piece above. Quite different from the individually costly and risky pacifism of love expressed for those who hate us – a la Jesus or Gandhi.

And specifically on the French connection Haroon Moghul at Quartz, history matters even when it doesn’t justify:

[The] issues are worth paying attention to.
To be abundantly clear, these neither explain nor justify the attacks.
But they help explain why France is so repeatedly targeted.

And an alternative view of unintended consequences suggests at least how seriously the complexity has to be taken, even if you don’t agree with the logic and conclusions. Bassam Tawil at Gatestone Institute on what we might learn from the Israel-Palestine component of the problem. Hat tip to @AMDWaters.

And some truth in irony taking apologism to its logical extreme, on Facebook: 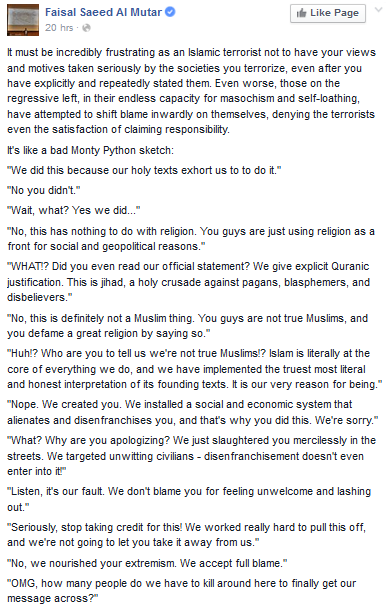 One thought on “Addressing Motivations of Islamist Terrorism. Apologist or Denial?”