Reaction to the recent bullying of philosopher Kathleen Stock at Sussex Uni has maybe brought this awful “war” to a head? A “TERF War” as a symptom of wider culture wars, cancel culture and woke identity politics in general.

As someone with no direct skin in the games of Feminism and LGBplus rights it has always been a question of would-be rational (progressive) discourse being disfigured by ideology vs freedom of expression as a human right (for short) and the fact that what we (really) mean by free speech is incredibly complex and problematic. (How long have you got? – no amount of “rules” can avoid being gamed by those acting in bad faith, so good faith respect for the point of having rules is infinitely more important than the objective detail of any rules.)

In the “TERF War” my instinct is and always has been to defend the women (and lesbians and gays and trans and minors) on the receiving end of the ideological bigotry, the lack of care and the downright targeted threats and violence. (Ref – dozens of my posts here and hundreds if not thousands on social media). The woke word-salad beyond women and LGB has become convenient cover – in  many cases probably ignorant cover – for misunderstanding the care and good faith aspect of freedoms. Simply adding the crass “be nice” rule cannot fix this.)

Several things happened in the last two days whilst the Sussex Uni management and the UCU traded public statements “condemning recent events” (a euphemism for  each side’s take on the bullying of Kathleen Stock).

One, a statement of solidarity from philosophy academia in support for the defence of basic freedoms, independent of any specifics of Stock’s beliefs or statements or even the topic in contention – “Trans”. (The original list here.) Significant not for the numbers – though it is now growing fast – but for the sheer range of philosophical and political positions of the many signatories.

Two, a piece by Matthew d’Ancona in Tortoise, being quoted by many:

“Why do all conversations always end up being about trans?”

“If you think this [TERF War] is being fought on a level-playing field, you haven’t been paying attention.”

“The truth is the trans debate is unavoidable because it is really a crossroads, and one that leads in all directions in our culture: to freedom, censorship, identity, truth, scientific reality and Orwell’s “secret doctrine”.

“Defeating this cult is the intellectual and political calling of our age.”
– Denis Kavanagh

“The ‘TERF wars’ are only marginally about trans issues.”
– Mark Hammond 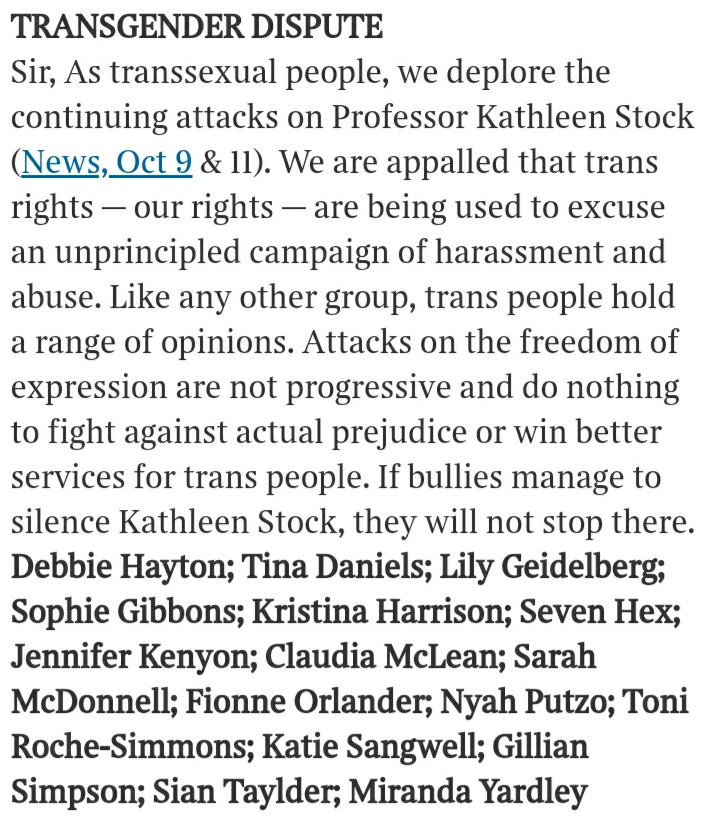 Trans-gender rights being “used as an excuse” in a Letter to The Times from the “trans community”. Something has changed with wider recognition of what this “war” is really about, with what is at stake. In my own recurring words:

“What passes for rational public discourse,
our very rationality as individuals, is at stake.”

[Hat tips to many feminist, gay/lesbian and trans friends on social media. @Katoi @Jebadoo2 and many more. And acknowledgement to @Glinner who took the first hit in the early days of this “war”.]

And hot off the press – maybe Stonewall’s disgraceful role in this whole debacle is about to become clear: